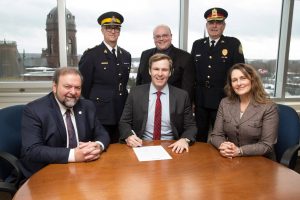 As a new year begins, the public is reminded that they play an important role in solving crimes in their communities. See something. Hear something. Say something! is the theme of Crime Stoppers Month in New Brunswick for 2017.

“Crime Stoppers has played an important role through the years in making our province safer, through their education and public service efforts, and by providing an anonymous means of reporting crimes in communities,” said Justice and Public Safety Minister Denis Landry. “For these reasons, your government is proud to once again declare January as Crime Stoppers Month.”

The provincial group serves as the parent organization to 21 local chapters.

“Over the past 31 years, we have been presented with 40 Crime Stoppers International awards in recognition of our members’ hard work raising funds and promoting our program,” said provincial president Mark LeBelle. “The New Brunswick Crime Stoppers program is recognized as one of the best in the world.”

In that time, the organization has assisted law enforcement agencies in solving more than 8,200 cases, resulting in more than 10,000 charges and 8,900 arrests. Their efforts have also resulted in the recovery of more than $8.5 million in property, the seizure of more than $70.4 million worth of drugs, and solved arson cases which totalled more than $16.3 million in damages.

“By working together with the public, media, and law enforcement agencies, we can do a lot to help our communities in the fight against crime,” said LeBelle. “More crimes are being stopped, solved, and prevented because of New Brunswick Crime Stoppers. With the help of all our dedicated volunteers, co-ordinators, supporters and partners, we will continue to be second to none.”

Landry said the organization has played an important role in the province’s efforts to curb the sale and distribution of contraband tobacco, and in enforcement measures to protect natural resources.

“This is thanks in part to the intelligence provided to law enforcement by Crime Stoppers,” he said. “Their contribution has been invaluable.”

Anyone with information on a crime is encouraged to contact New Brunswick Crime Stoppers at 1-800-222-TIPS (8477) or submit a tip online. Mobile device users can text a tip by typing TIP212 and sending their tip to CRIMES (274637). Anonymity is guaranteed.

There are 4 ways to submit an anonymous tip to Crime Stoppers:
TALK: Call us toll-free 1-800-222-TIPS (8477)
TYPE: www.crimenb.ca/tips or directly at www.crimetip.ca
TEXT: TIP212 plus your message to CRIMES (274637)
TAP: Download our TipSubmit™ Mobile App for Apple™ or Android™ devices